I Drove Drunk and Got Pulled Over by a Cop

I’ve done a lot of stupid things in my life. Don’t let that be confused with regrets. I regret nothing. Everything that I’ve done has brought me to the place that I am today. And I wouldn’t change it for the world.

Without further adieu, some of my more idiotic moves…

Cutting a bald spot on the crown of my head during the formative years.

Spending a long New Year’s weekend in Indiana with 5 stoner couples with 6 movies constantly looping and the smell of weed permeating the cabin.

Smoking my very first cigarette…at the age of 23.

Going on a date with (and continuing to date) a guy (who turned out to be a drug addict) whom I met on Craigslist.

Quitting my job because my boss asked for my letter of resignation instead of waiting for her to fire me.

And the number one stupidest thing that I’ve ever done: Driving after drinking. Never. Ever. Ever. Do this. A few years ago, I was really really stupid. Really stupid. After several libations on my own one slow Friday evening at Flaherty’s, I decided that I wanted to go sing some karaoke at another bar. 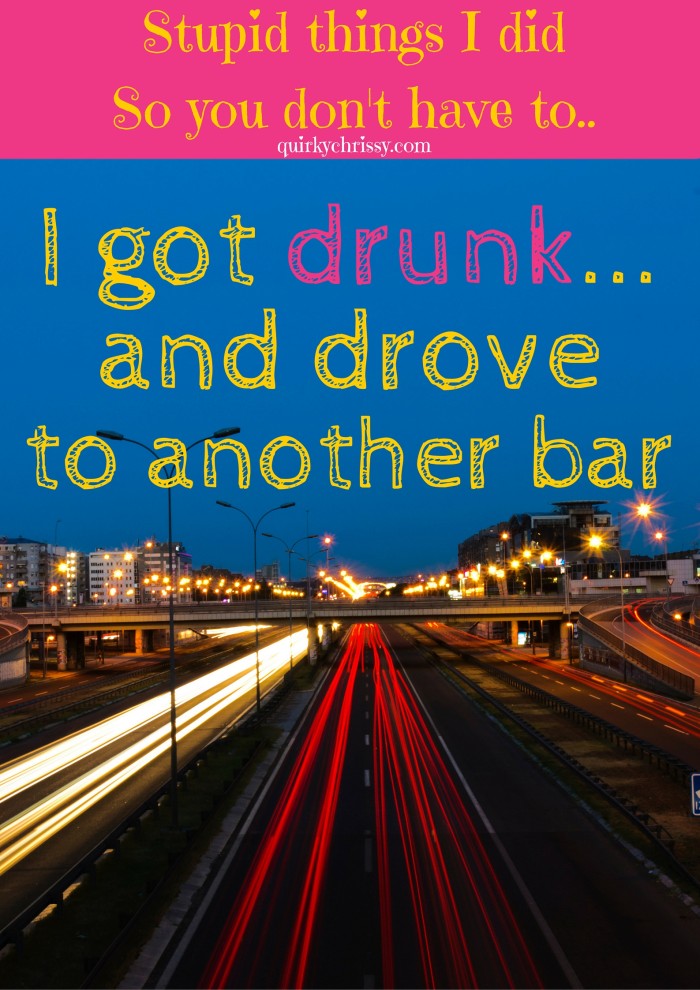 I tipped my bartender, who didn’t seem to mind that I was a little intoxicated as I was leaving. In her defense, I looked and behaved just fine. But a small part of me knew that I probably shouldn’t have been behind the wheel. But I was bored playing my 207th game of Mah Jong that night, the bar was dead, and I had friends drinking at another bar.

For some reason, unbeknownst to me, I decided to take the main road, instead of the familiar back roads. Driving from one town, through another, to a third town, I noticed a police officer driving behind me. I did a quick check of my surroundings: speed limit (check), seat belt (check), breath (gum? no, but shit, there’s not much I can do about that). There’s no reason that this police officer should need to pull me over. Phew!

So I re-checked my surroundings. Do not panic. Do. Not. Panic. I looked for my insurance card, which I was infamous for not being able to find. Found one! From last year. Hopefully, it will do.

The police officer walks up to my window and I roll it down.

“Do you know why I pulled you over?”

“No, officer, I’m sorry, but I really don’t.” I genuinely had no clue. To my knowledge, I had done nothing wrong. Well, sort of. Nothing that warranted pulling me over. Plus we all know I’m a terrible liar. PLUS it’s a proven fact that cops can see right through my bullshit when I try to lie.

“Did you know that your license plates expired last month?”

Oh my God, really? “Oh my God, really?” I knew that my shock was evident by the sympathetic look on the officer’s face. I kept babbling, “My dad and I were just talking about this. He had asked me when I needed to renew my plates, but I thought that they weren’t up until April. That’s when I got the plates. I got the car in November of 2006. I haven’t gotten anything in the mail that says I need to renew them. I’m so sorry.”

The police officer looked at me and asked for my license and insurance. I passed him my driver’s license and was holding onto my expired insurance card–waiting to pass it to him. He scanned my license quickly, and never once even took a second look at the insurance card. He handed my license back to me and told me to go get my plates taken care of the next day. He told me it may be a hefty fine for being late, but he would not write me a ticket. He proceeded to wish me a good evening, and to drive safely before he walked away.

[bctt tweet=”This mistake could have cost me everything.”]

Not once did he ask me where I had been.

Not once did he ask me where I was going.

Not once did he ask if I had been drinking.

I took that as a sign from God that I should never. Ever. Ever. Drive drunk again. My one free pass, I called it. I was a mere two blocks from the bar that I was heading towards. I panicked and called my best friend, Mark, who was at the airport on his way to some other country. He told me that I was stupid, and I shouldn’t be driving. He told me to calm down and leave my car at the bar that night. So I got to the bar, and called my flavor of the week. He met me at the bar and took me to his place when it closed. The next morning, he got me to my car, and all was well. But holy shit was I freaked out.

I’d like to tell you I never drove drunk again, but that would be a lie. And there would be fewer stories to share with you. For the record, I don’t condone drunk driving nor do I do it anymore. Ever. At all.

Have you ever done something incredibly stupid and gotten caught? Any run-ins with the law that you escaped by the skin of your teeth? Drunk driving stories? Tell me your tales!