We got Bismark when I was 5 (Our first German Shepherd, Joey, died on my fifth birthday) and we had him until I was a sophomore in high school. I loved him so much. He could always manage to make me smile, even when I was crying. I would be sitting on our front landing, and Biz would come over and lay his head in my lap when I was sad. He was a good dog. An ornament that bears his name still hangs on my parents Christmas tree in his honor.

When I was a little girl, I loved playing games, and I wanted to play them all the time. Sorry, Monopoly, Chutes and Ladders, Boggle, and more, but my favorite game was Life. Constantly, I would ask my big sister, my mom, and my dad to play any one of these games with me, but mostly it was The Game of Life. No one ever wanted to play with me. So, more often than not, I found myself playing Life with my dog.

Bismark (our second German Shepherd mutt) was the best dog ever; he would snuggle with me for hours and he would play Life with me whenever I wanted to play. Of course, I had to do all of the work, but he would sit there patiently holding the spot of the blue car player. Life was one of those games that I couldn’t actually cheat in my favor, but I’m pretty confident that I won every game. (Side note: Now I try to play Life with my godson Little A whenever he asks me. I remember what it’s like.)

Bizzy could be a pain too. If you accidentally said anything that sounded like the word “pew,” Biz would go running out of the room. Somehow he knew that it meant something smelled, and he always thought it was him. A fun party trick at times, it got old pretty fast. A little bit of a runner, Bismark was also always escaping. He would find his way out of the backyard, and we’d hear him barking around the block or down the street. We never had to worry too much because he always came home. Often, we’d find him standing outside the front door or at the backyard gate (on the outside!)

Chester, our old gray house cat, was indifferent to Bismark. Chester loved Joey too much, and Bismark was just another dog. Chester and Joey used to sleep snuggled together like brothers. They even cleaned each other. 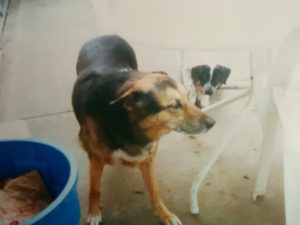 When we were in grade school/middle school, my brother got Rex, the trouble-making Dalmatian puppy. He brought out the puppy in Biz and made him seem years younger. The two would scamper around the backyard together, with Old Biz humoring the nipping, jumping, racing pup. When Biz would escape, Rex was right along with him, and good ole Bismark taught him to always come home. The sight of the two of them standing outside the back gate was infuriating, hilarious, and adorable all at once.

In the summer of 1996, a growth started forming on Rex’s stomach. As it grew bigger and bigger, we became more concerned. We took him to our then-regular vet in Lombard, and they told us that Rex was fine, it was a benign fatty tumor. They gave us some cream to put on it and told us he was fine. A year later, Rex’s health started dwindling, and we brought him back to the vet. The tumor was, as it turned out, cancerous. My parents put Rex down in November of 1997. The following January, Chester’s and Bizmark’s health were also failing (an old cat and dog, respectively), and we were saddened to imagine a near future without any of our family pets. Chester, who loved the Christmas tree over all other places in our home, curled up under the tree one night after mom went to bed, and never came out.

German Shepherds are known for their hip problems later in life. This was definitely the case for my board-game-playing dog. In February, after months of dragging his legs behind him, and loss of his bowels, my parents took Bismark to the vet for the last time. I was at a sleepover and never got to say goodbye. I didn’t even know that it was happening. As my distraught dad pulled the motorhome (his daily driver) out of the vet parking lot, he accidentally knocked over the vet’s sign in the front of the property. The vet was PISSED, but after my mother -sassy pants that she is- kindly reminded him that he basically killed our 5-year-old Dalmatian, the vet told them not to worry about it.

We never went back to that vet, again.