I mean, I’m not surprised, really. With less than 50 shopping days left until one of my favorite holidays on the planet, Santa’s probably already working his butt off. I vaguely remember seeing presents that looked as if they came from Sam’s Club once or twice in my Christmas morning experience…

Or Santa’s a procrastinator like me. And he and Mrs. Clause were just doing their stock-up shopping for the winter rush when things get too busy up at the North Pole. I forgot to ask.

Brian and I joined Sam’s Club a few weeks ago. We thought it was the responsible, grown-up thing to do, being new homeowners and all. (Before you get your panties in a twist about the Costco vs. Sam’s Club thing, we got a Living Social deal for Sammy’s. And with all the bonuses and shit, it was practically free.) Also, some friends of ours had these caramel cheetos-like snacks from Sam’s that were SO good. I wanted them.

So anyways, we’ve made it a weekly routine to hit up Sam’s on Sundays for free sample lunch (you know you do it too) and a few Sam’s Club type purchases. Bulk tortilla chips. Bulk tasty cheese. You know, the important stuff.

As I was browsing the berry selection, I looked up and saw him. He was right there, ready to make my Christmas wishes come true. And just like that, he was gone again. I looked around, and he had disappeared. I told Brian, “I saw Santa!”

He didn’t believe me.

A few minutes later, I saw Santa adding a few sweets to the cart that Mrs. Clause was protecting so carefully. She teased him about the cookies, but they headed toward the milk…and I chuckled.

I thought back to the last time I encountered Santa Clause prior to Thanksgiving. I was working at a bar (that’s a really good story, by the way…I recommend it to anyone who’s ever worked in the service industry. Don’t worry, I’ll still be here when you return), and I stopped into Caribou Coffee for a quick pick me up. Santa was there, handing out candy canes. I took one and thanked him and told him I was really good that year, could he please bring me the love of my life? Okay, maybe I thought that last part about being good and looking for Brian…but a few days later, Brian (whom I had not met at that point) showed up at the pub, so Santa MUST have been listening, right?

So it only seemed right that I saw Santa a few years later (now), when Brian has become a permanent part of my existence.

A few minutes later, I ran into Santa again standing in line for quesadillas. I was building up the courage I needed.

Finally, right in front of the frozen food aisle, I walked up to him and asked, “Can I take your picture?”

He laughed, and his belly shook like a bowl full of jelly. I knew it was him.

I heard someone in the background mutter, “Well SOMEONE has some Christmas spirit.”

I got ready to snap his pic when Mrs. Clause appeared out of nowhere, “You’re going to be in it, right?”

I handed my secret phone to Brian and hugged Santa. Mrs. Clause quickly licked her hand and patted down Santa’s cowlick. “There, that’s better!”

I thanked Santa and Mrs. Clause and told them I couldn’t wait until Christmas. 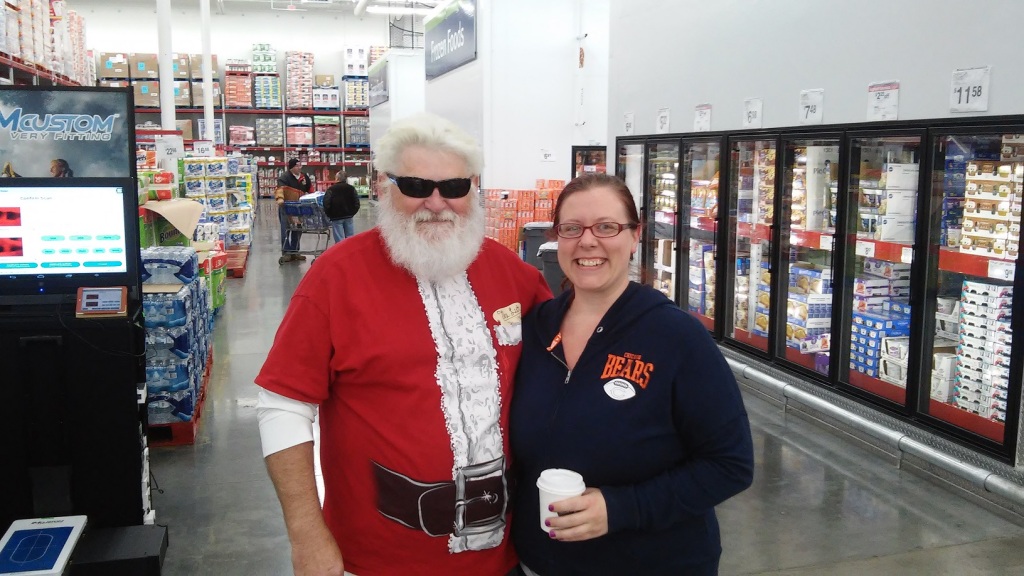 A woman passing by asked me, “How old do you feel, now?”

Blog Friends, have you ever had a serious encounter with the red-clad man from the North? Do you still believe?