This morning,  as the conductor was collecting tickets on the train,  he stood impatiently beside our seat.

“Ticket!” I could almost hear him stomp his feet.

I cried out, “Oh!” because I was busy reading the Monday morning Facebook report.  I reached to dig through my sweet hot pink mini backpack and grab my ticket as Brian reached into his pocket. The conductor looked directly at me, his face and tone warmer, “No, you’re  fine.” And he waited for Brian to display  evidence that he belongs on this train.

Brian scoffed at me as I giggled. Actually, I’m pretty sure he also shook his head in utter disgust. He hates that this happens. Because it also means when I’m  careless and forget my Metra pass, or I forget to switch to the next month’s ticket…the conductors don’t make me buy a ticket. 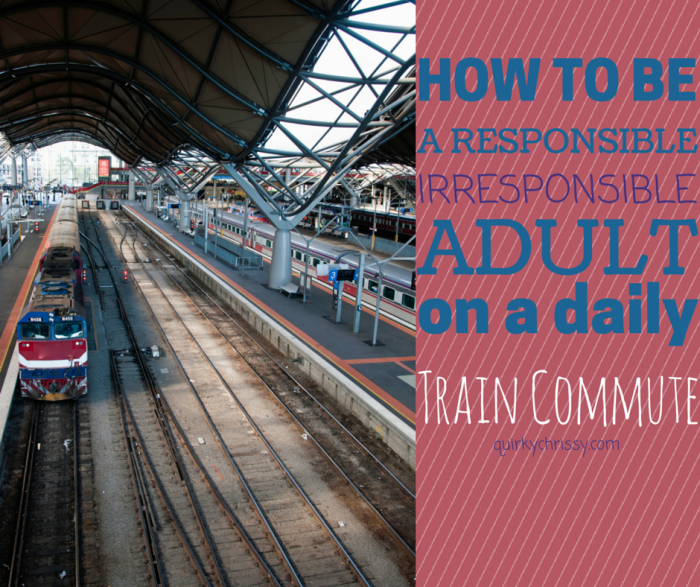 He says this is propagating my bad behavior. I call it  relationship building. On our old train line, I made friends in the morning. I had a group of train buddies who all hung out in the same vestibule of the front car. We all laughed and joked with the conductor, and he never even looked at our passes, save a couple times a month or so to ensure we had monthly passes.

When we lived in the apartment, we were on a different train line than we are now. Usually, Brian wasn’t on the morning train with me. He would drop me off so I could get on an earlier train, park the car, and take the next train into the city. Basically, Brian’s  a fucking saint. We still use that system sometimes for our new train line if we’re running late, but he often gets on the same morning train as me.

On the old line, we took the same train home every night as well, and our conductor was amazing.  We were even on a first name basis with him, and he would stop and chat with us for 10-15 minutes every day. When we went to Florida, I even bought him back some cool rocks I found on the beach because he collected them.

But I sit in the same seat every day. And I smile at the conductor.  I say “good morning.” Apparently,  that can go a long way.

So when I forget to bring my new monthly pass, or I switch purses, I don’t have to come up with $9.75. Or spend 20 minutes trying to prove I already pay $150/month to get to work. Because they know me.

And that makes me smile.

Even if it pisses Brian off when I’m  irresponsible and forgetful.

Do you have a daily routine in which you interact with the same people? Is there someone who knows your morning  coffee order? What’s your daily commute like?