Always Read the Fine Print: AKA Wet T-Shirt Contest on the 4th of July

So last year, I told you all about my klutziest sassy-pants 4th of July. As this is a humor blog, and really we need to offer you a few laughs on this fun summer holiday…this year, I thought I’d tell you about my craziest 4th of July.

A few years ago, I was president of my local Jaycees chapter. The Jaycees are a leadership organization that I was really hardcore into for a few years. I even received national recognition (but that’s a story for another day). When I was president, I had a lot of responsibilities.

My chapter ran two huge projects over the course of the year. A haunted house and a summer festival. I didn’t run for president. I fell into the position (more on that another day). But I was a force to reckon with. We had a lot of problems getting the summer festival off the ground, but with a LOT of patience, and news coverage, we  were able to get the show on the road.

One of my jobs, as president, was to sign every. single. contract.

When you’ve got a huge festival with 20 food vendors, 30+ businesses in a business tent, 30+ crafters in an arts & crafts tent, bands, performers and other entertainers…that’s a lot of John Hancocks. Each facet of the fest was controlled by a committee, who would hand me stacks of contracts once a week to sign. As the contracts were all basically the same for each facet, I would read through one of each contract in it’s entirety, then browse every page of every contract for handwritten changes before signing.

One of my committee’s chairmen, though, thought it would be fun to change some of the fine print in ONE of the many contracts. They were responsible for mainstage entertainment, and they added a little extra clause. Of course, they didn’t tell me about said clause until the week of the festival. And showed me where I signed.

Basically, I signed a contract that said I would wear a bikini throughout the course of the fest, serve beer and drinks to the entertainment chairmen in said bikini, and in the event of rain, participate in a wet t-shirt contest.

And so I went to Walmart, bought a stars and stripes bikini, and wore it for 4 days. (I know I’m totally gross.) I bought two beers, walked them over to the chairmen in my bikini, said “here’s your beer,” and walked away.

And yes, friends…it rained for all of 15 minutes. So, after they poured a cooler of ice on me, I also let them do this: 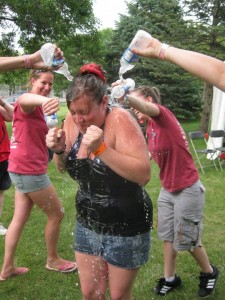 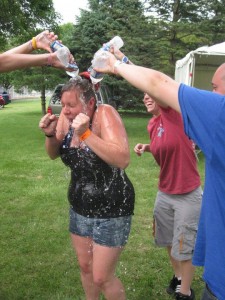 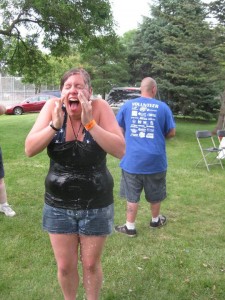 I’m working on acquiring the video of the cooler dump, so perhaps I’ll be back with that for you.
Updated: Here’s the video!

Brian and I are headed to a family picnic today. What are you guys doing for the 4th of July?