This post was recognized at BlogU as Term Paper of the Year in Women’s Studies. My BlogU roommate was kind enough to capture the video of my reading. Enjoy.

When you’re nine years old, the Grade School Powers That Be separate the girls and boys into different classrooms and begin an annual ritual of education that continues for several years. Girls learn all about getting their first periods, weird hair growth, and unusual body odor. Boys, I can only assume based on my experience, learn about making fun of girls, making fun of each other, and how to change a tire. I think.

After watching an embarrassingly long video about a girl who played Little Orphan Annie on Broadway and her first period, we were given all sorts of pamphlets to bring home to our mothers, including an order form for a giant box o’ lady things…you know, like a period sampler pack. Obviously, I shoved these papers into the depths of my cluttered locker, never to be seen again (until locker clean out day).

Of course, the mom-network message arrived via telephone a few days later, when my mother called me down to lecture me and cry about how I didn’t talk to her about this very important day at school. “You never tell me anything,” she complained.

In my head, all I could think of was my dad’s favorite line, Telephone, telegraph, tell-a-Nudd. Nudd being the collective whole of my mother, her sisters and her mother. As soon as one of them knew something, the world knew. Mass communication that ran faster than I could possibly imagine—probably faster than the internet. I knew that the minute I told my mom anything, the world would know. And this whole period nonsense? Totally embarrassing. I wanted nothing to do with it…until I was in middle school. 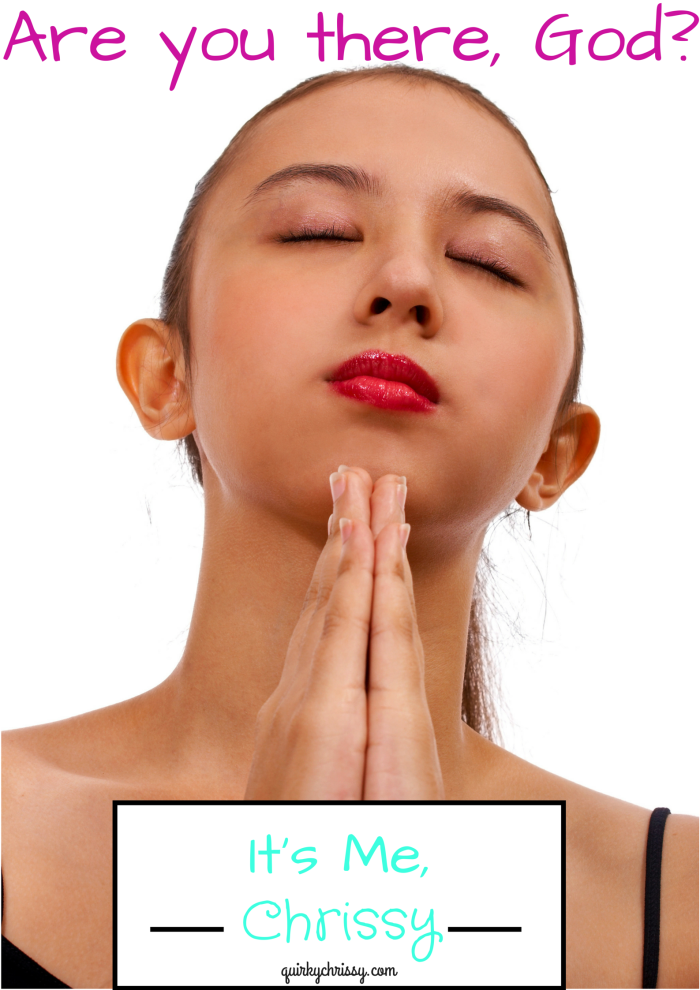 When I was eleven, I was already among the very unpopular, invisible kids in middle school, but my best friend in the whole world was a cool kid. And I wanted to be just like her. I distinctly remember when all of my childhood friends started to get their periods. They talked about it like it was a special club that only girls who had been visited by Aunt Flo could be a part of.

And so I prayed. Like the good little Catholic girl that I was, I said my prayers every night. And I prayed to God, begging and pleading with everything I had to bargain, to get my period and be just like the other girls. Every night a relatively similar prayer would follow the common prayers I learned as a toddler. God, I know you’re a pretty busy guy and all, but if you could please let me get my period, I would really, really be thankful. Also send my love to Grandma and Grandpa…Thanks. Of course, this is reminiscent of a strikingly similar prayer that I would eventually repeat several times throughout the course of college and some time afterward…but that’s another story for another day.

Even though we ran in different social circles at school, my friend and I still spent lots of summers together hanging out. Of course, on the nights when I slept at my friend’s house unexpectedly, I found myself sleeping in an old t-shirt, without an extra pair of clothes for the next day. On one particular morning, I woke up and went to the bathroom to discover that I had, in fact, shat myself overnight. I had felt stomach pains the night before, but still I was painfully ashamed of my little mishap. I checked the fold out bed and was thankful that nothing had stained that. What baffled me, of course was how my poop managed to make it to the front of my underwear and hardly touched the ass-end of my panties. I worried for the cleanliness of my lady bits, so I wet some toilet paper and wiped them clean.

Embarrassed and afraid to say anything to my friend or anyone in her family, I wiped my underwear with toilet paper, rinsed them as best as I could, dried them with more toilet paper, and put them on backwards. My thought process? The poop needs to stay on the poop side.

I put the rest of my clothes on and feigned illness to get my mom to pick me up and take me home. For the next few days, I continued to discover that somehow I was crapping my pants with some frequency, without even realizing it. Being the quiet and shy, embarrassed little girl that I was, I did everything I could to hide the evidence. I threw at least 3 pairs of underwear away, spent a lot of time in the bathroom wiping myself and wondering what the fuck was going on with my body.

Eventually, the problem resolved itself, and I went back to life as a pre-teen. We weren’t called tweens back then. I continued to pray to God that I would get my period like the other girls and wonder what it would be like when I finally did get my first period.

A few weeks later, though…it happened again. I crapped my pants. Again. And somehow it kept sliding to the front of my underwear. I couldn’t understand it. Was I sleeping on my stomach? This has got to be really bad for me, right? Of course, a normal kid may have gone to their parents for help…but me? I just kept throwing away underwear and spending a ridiculous amount of time in the bathroom.

The third time it happened, the brown spots were less brown…and more red. And all of a sudden, I knew what the problem was. Apparently, God had already answered my prayers three months prior, and I was cursed with Aunt Flo for all eternity. It was awful.

First, I had to tell my mom. I dreaded this. I dreaded this more than anything in the world. Not because my mom isn’t wonderful…but more so because I was incredibly embarrassed. And ashamed to talk about anything personal. Everything embarrassed me. I didn’t want to talk about things, I didn’t want to know about things…I just wanted to exist, hidden.

When I finally got out of the bathroom to tell my mom that I think I got my period…I failed to mention the last two months of pant-crapping horror. Seriously. She didn’t even know until she read this story.

I mean…No one TELLS you that it might come out brown the first few times. They just say you’re going to bleed from your lady bits. And that’s that. I saw the movie, Carrie. I knew what I was supposed to expect. This was not that.

So of course, when I whispered to her, “I think I got my period…” she practically jumped for joy. Of course, for someone who was anxiously awaiting my period the way some moms await their daughter’s first dance recital…you’d think she would have been prepared. I mean sure, I didn’t ask her to order the period sampler pack when I was nine, but maybe a box of pads under the sink just in case? I was eleven, and quite frankly, the thought of shoving something up my lady bits frightened the crap out of me. Just not the period crap. That was different.

My mom hadn’t had a period in years, so she didn’t have to deal with pads or tampons or bleeding like a stuck pig sixty fucking days of the year. So she had to run out to the store to get the things I would need. Before she left, I begged her not to tell anyone. I begged her especially not to tell my dad. Within hours, the entire family network knew that I had become a woman. Including my father.

Eventually, I came to accept the horrors of this monthly curse that I had prayed so hard for. I wanted to be a part of the club, but I realized that the other girls just wanted everyone else to be as miserable as they were once a month. These days, I’m not praying to get my period. Instead, I find myself asking, how long until menopause?

Was your first period even remotely as embarrassing as mine? On a scale of one to awkward, where does this fall? Tell me something painfully embarrassing about your childhood, my friends.