Leprechaun, My Budding Acting Career, the Playground, and Netflix

Now, I know we’ve already established how very uncool I was in grade school. But let’s focus instead on the ridiculous weirdness that made me special among the outcasts who didn’t play kickball every lunch hour on the playground. 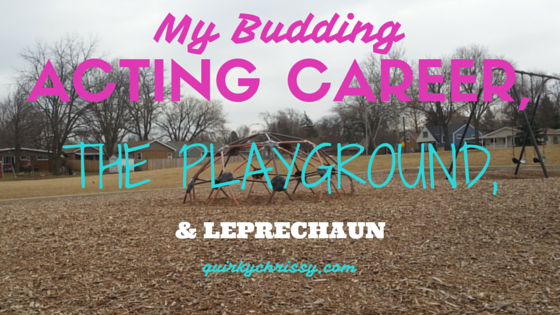 Now, as a young child under the age of 10, I wasn’t really ALLOWED to watch things like MTV and R-rated horror movies per say…but let’s be honest here and say that just because it wasn’t allowed when Mom was around didn’t mean it didn’t happen. Sisters and babysitters and aunts and elderly next-door neighbors were all over that shizz like white on rice.

So it happened that Leprechaun (check it out on Netflix, kids) made its way into the barrows of my mind. It quickly became one of my favorite movies, what with Jennifer Aniston’s adorableness and Willow Warwick Davis playing a wickedly greedy leprechaun. Fun facts: Warwick Davis has been in SEVERAL of my favorite movies and TV shows, including Star Wars, Willow, Labyrinth, Harry Potter, The 10th Kingdom, Doctor Who, and Leprechaun.

With my near-eidetic memory, I could very easily recall the whole of the movie, including key dialogue and the most interesting of scenes. Which was INCREDIBLY lucky for the kids on the playground. For the better part of a week, I gathered a small group of my most easily entertained peers near the far swing set for the dramatic performance of a lifetime. From start to finish, I acted out the entire movie in a one-man show of sorts with dialogue, live action and yes, voices. I was brilliant for a 10-year-old.

My classmates were amused, engaged, and excited to have access to such a timeless classic movie, and I was entirely convinced this was the start to my acting career. As evident by my listing on IMDB (yes, that is, in fact, me…I should probably try to get a picture up there so directors can see my Oscar-worthy mug, right?), I’m definitely going places, y’all.

Don’t believe me? Look for my cameo in this highly viewed spoof on YouTube. Thanks, Craig!

After the curtain closed on The Leprechaun, I attempted to reenact a few other movies that my childhood friends hadn’t gotten their grubby little paws on, but nothing had the engagement power like The Leprechaun. Not even Leprechaun 2, which you can also find on Netflix.

So why don’t you make a day of it tomorrow, in honor of my birthday, and watch the entire Leprechaun franchise on Netflix? I hear Leprechaun in the Hood makes for a great drinking game.

Blog Friends, what did YOU do on the playground? What are you watching on Netflix? Have you seen Leprechaun?

While this is not a sponsored post, Netflix hooked me up with a year’s subscription and a device on which to watch movies I used to reenact as a child. But I was a Netflix subscriber long before joining the Stream Team. So there’s that.