Drunken Laundry at the Laundromat

In the spring of 2008, my parents’ washing machine was on the fritz…and being a grown woman still living at her parents’ house…I needed to do my own laundry. Of course, I waited until I had practically nothing left…(yes, I would occasionally buy underwear and socks, and even go without one or both because I didn’t want to do laundry…) and my wardrobe options were getting pretty scarce. 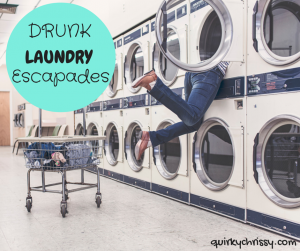 So, one night, after a huge Easter feast, a surprise homecoming from my best friend, Mark, and a lazy evening watching Enchanted for the second of three times in a week, I packed up my car and drove to the nearest laundromat (Actually I packed it up twice–once to move out of Mark’s apartment, where I was living/apartment-sitting while he was on a long-ass business trip, and once with laundry).

I cannot claim whether this was truly nearest my house…But it was nearest my 2nd home–Flaherty’s AKA The Bar. I found out that the laundromat was open on Easter (Woot!)…until 9:30 (which I discovered at 8:40-another resounding Woot Woot!). As I was loading up my arms with Tide and Bounce and laundry and money and keys, I banged my head, not once but, twice on the car door. Keep in mind this was in addition to the neck and shoulder bangs from unloading my stuff from Mark’s apartment. The evening was not necessarily going the way I had hoped.

I walked into the laundromat and there was one guy doing his laundry. Keep in mind, this was a big production for me, since I’ve never used a laundromat. The closest experience was in the college dorms, and that was designed to be easy (and more often then not, I took my clothes home to wash them). So I put soap in three of the nearest washers, which weren’t going to fit ANYTHING. Apparently these were commercial washers. Although I’m still not entirely sure what their purpose was…I knew I messed up and wasted money. So I tried stuffing clothes in anyways, and I soon realized…maybe not. I looked around and realized that there were normal-people washers in the back of the ‘mat. Ahhh… that makes sense-put the real stuff in the back.  Right? Fits more clothes. Less money. Bingo! I finally got everything sorted, in, and spinning.

At this point, I decided I wasn’t going to sit around and watch laundry spin…so I left. Ok, I went to  the bar and ordered a very necessary drink. And a pizza. Mmmm…pizza was one of my lenten offerings that year, and I was thrilled the sacrifice was over. I started chatting with my pal Liz and telling her about my most recent adventures in Chrissy-land, and we were laughing up a storm.

About 20 minutes later, I ran back to the laundromat with Liz to check on my clothes. And it was locked.

Shit. The guy came out of the office and let us in. He told us that he was leaving and we could prop the door open if we need to leave for anything. Oh dear.

I was about to transfer my clothes, and again, I wasn’t quite sure how this worked because there were also two different dryer types–a bigger one and a smaller one. The guy put money into the big one for me(score!) and said it was the better one. So I stuffed all of my clothes in there–all three loads of laundry–and vowed to return in a bit. (That vodka soda and frozen pizza was calling my name).

Liz and I propped the door open with my Bounce box and walked back to our drinks and the pizza. We hung out for a bit and when it was time to grab my clothes, we invited another girl to join us for round three of laundry-mania. We got over to the laundromat and my clothes were still not dry, so I put more money in and planned to come back after another drinky…you can see where this is going.

After our final return, the clothes were dry, folded (poorly) and put into my basket. As we were walking out, we double checked: Money, keys, clothes, Tide, Bounce. Closed the door.

And oh FUCK! Immediately, I knew that I had left some stuff hanging to dry inside!

Calling your dad the next morning to retrieve your bras from the laundromat:

Blog Friends, have you ever had to ask one of your parents to remedy your flakiness? Tell me one of your embarrassing stories so I don’t feel quite so bad!