I do not have a green thumb. I seriously kill everything. With the rare exception of Bridget II, the schefflera I’ve been growing since college. Bridget I was also a schefflera, but she died during a winter or summer break in our college apartment when I was not there to tend to her.

Okay. Fine. Bridget II lives because my mother has a green thumb and she grew her into a tree. A tree that I now almost kill every 6 months or so. Speaking of which, I should probably go water her today.

So when I say I don’t have a green thumb, I mean it. But when I was offered the opportunity to test my creative skills in the world of terrariums, I jumped at the chance. Especially because Plant Nite hosts these shindiggities at over 700 local bars and restaurants in more than 75 different cities.

What’s Plant Nite? It’s a creative workshop that makes beautiful things easy and accessible for everyone. Basically, it’s like a painting party, but with plants. A host leads you through the instructions to create whatever is on the image, but you, as the artist, are free to make your own creative decisions.

I chose my event based on three things: 1. Proximity to my house, 2. The design of the creation, and most importantly, 3. The food at the venue.

The bar was a local restaurant/tavern a few towns over from me, and I opted for a terrarium set, titled “Fire and Ice,” because at the time, Game of Thrones was hot and heavy, and it just felt right. Look at this bad boy:

The food, though…that’s where my decision really came into play. This place is known for making a killer Bloody Mary, and I was not disappointed.

My future sister-in-law and I were starved, so we ordered a charcuterie display, meatballs, and a hummus-like spread that was really amazing. We took up half the table, but we didn’t mind.

Once we had our snacks and bevvies, we were ready to take on this plant thing. We each had two glass terrariums before us, and an oath. 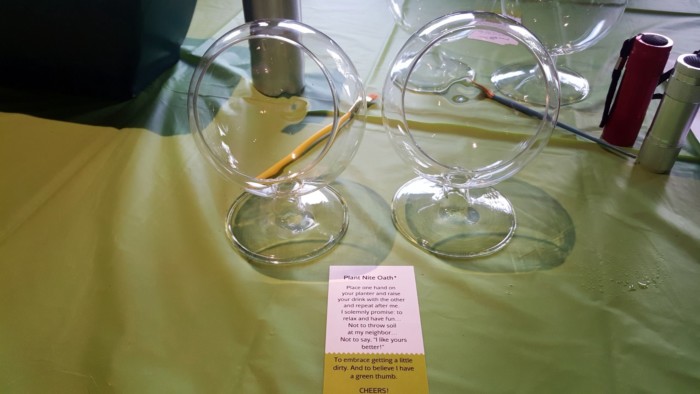 We read through the oath quietly, but when our host was ready to get started, she had everyone read them aloud together with many giggles and smirks, but we promised to have fun above all else. And we did. I took the liberty of borrowing an infographic that shows off the Creative Oath:

While the wonderful hosts had a wonderful step-by-step instructional, I’ve provided the abridged version for you to see how it works below.

Step 2: Fill terrarium with a light layer of dirt.

Step 5: Get creative! This is where everyone gets to shine.

Of course, the help of the hosts (and the amazing supply of colored rocks, moss, and other cool add-ins) made my terrariums as magical as they turned out to be. 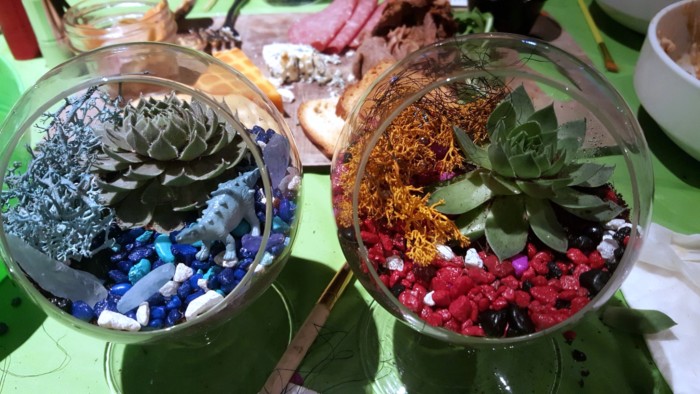 I was pretty proud of my two little dudes. I loved the colors (and of course, mixed in some pinks in the “fire” terrarium).

Now, the real trick — can Chrissy keep these dudes alive? We’ll it’s officially been one month since I planted them, and they’re not only still kickin’, they’re thriving!

Well, guys. I think my work here is done. Want to get a group together and check out Plant Nite on your own? I’ve got a fancy pants code for you to use (QUIRKYCHRISSY) at check out so you can save 35%.

I was given two free tickets to attend the class, but no one paid me to say nice things. All opinions are, as always, my own.