“Friendsgiving” is Stupid. We’ve Been Calling it Second Thanksgiving For Almost a Decade. And We Were There First. #StreamTeam

Thanksgiving is for giving thanks. Not giving friends.

So I’ve mentioned Second Thanksgiving in the past when I told you about the hematoma on my butt. But I’ve been hearing the term, “friendsgiving,” a lot lately in regards to people throwing these “festive affairs” with cheap wine and instant mashed potatoes. Even the Netflix Stream Team is celebrating a discussion of “friendsgiving.” And people have started calling our 9-year tradition “friendsgiving.”

And I hate that. 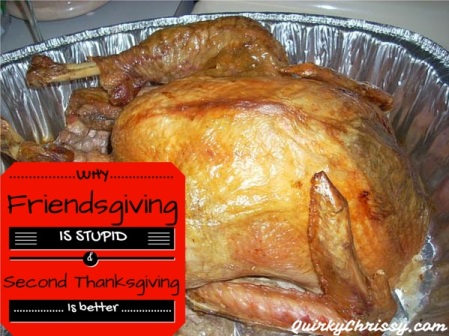 I hate it because that’s not what it is. It isn’t some hipster tradition that we just started doing in 2012 because we saw our favorite characters on TV celebrate Thanksgiving together as friends for years, but decided it needed a new name because Thanksgiving wasn’t good enough. The only place you can even find a definition of “friendsgiving” is on Urban Dictionary, which basically describes it as a subpar event where friends gather together the day before or the day after Thanksgiving to enjoy either leftovers or boxed wine and cheap dishes.

Did Jess and Schmidt re-name their Thanksgivings “friendsgiving?” No. (Okay, Schmidt may have decided on “bangsgiving” this year, but he’s dirty and ridiculous and it’s not REALLY a thing.)

Did Rory and Loralei head to “friendsgiving” with their people? No.

Did Ted and Marshall call it “friendsgiving?” Nope. (Fine, they had “slapsgiving.” Which was wicked and funny and not trying to MAKE A THING happen).

Go ahead! Celebrate the big Turkey Day with friends. Enjoy it. Watch a few Thanksgiving episodes of your favorite shows. Watch football.

I’ve heard people hosting and attending these “friendsgiving” dinners as early as the beginning of November. I’m sorry, what? That’s called a dinner party. If you’re going to host a Thanksgiving to celebrate with the family that you chose, instead of the family that you’re born into (or stuck with), do it the week of Thanksgiving. Or ON Thanksgiving. Last year, I attended 5 Thankgiving feasts. Five. And not one of them was called, “friendsgiving.” Because it’s stupid. We had work Thanksgiving, Pre-Thanksgiving, two family Thanksgivings and Second Thanksgiving. At all of these events, there was turkey. Ham. Homemade potatoes. Real vegetable dishes. Pie. Nothing was re-purposed leftovers. We made fresh, delicious food for each other. And celebrated a thankful day.

Second Thanksgiving may be a way to enjoy a turkey dinner with the family that you choose, but it’s not a cheap substitute for the real deal. It’s an equal. It’s powerful. No one’s fighting over what time to bring the turkey out. Dirty Uncle Jack isn’t flirting with your girlfriend. Crazy Cousin Maria isn’t drunk and picking fights. Grandma isn’t yelling at the little ones to sit down. It’s just friends. Drinking good wine, expensive beer, liquor-filled jello shots, and eating the best food that each attendee can prepare. We typically host it on the Sunday after Thanksgiving, so we can even watch football as per Thanksgiving tradition.

My college friends and I started Second Thanksgiving after a discussion of our crazy (albeit lovable) families on the holidays. Nine years ago at my best friend’s apartment (the same best friend who’s car I stole a few years ago), back when I used to throw parties at other people’s homes. The first year was a potluck of epic proportions, but the second year became a full turkey dinner because I wasn’t going to have a real Thanksgiving with my family (one day, I’ll tell you about that). And I wanted a real Thanksgiving.

For nine years, I’ve hoped to one day host out of my kitchen. This year is the first year that I can host Second Thanksgiving in my own home. All my Clark Griswold dreams are coming true.

This post is brought to you by the fine people at Netflix. As a member of the Netflix Stream Team, I was given a free year of Netflix along with some other sweet perks. Prior to joining the Stream Team, I had a Netflix subscription of my own accord. Because Netflix is awesome. And no one paid me to say that.