I Got So Drunk, I Swallowed Live Goldfish

When you’re in college, you’ll do anything to be one of the bad asses who can drink like a fish. I think I got that confused with swallowing live fish. They sound really similar, right? 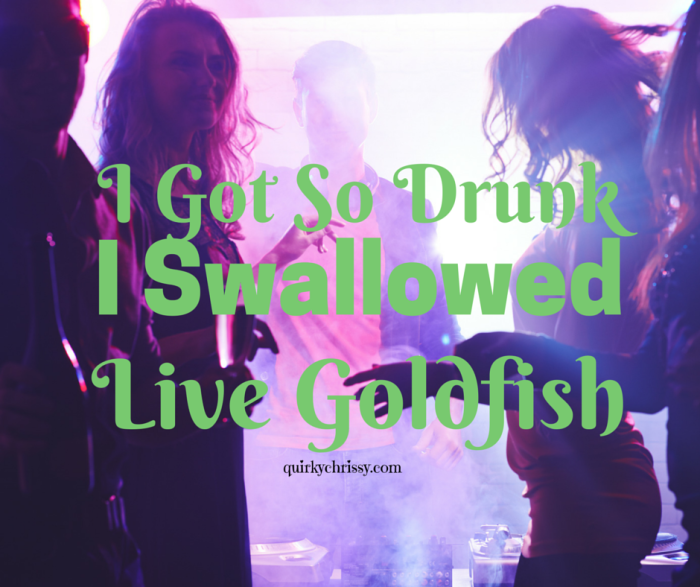 My first semester of Sophomore year at Bradley University was my most alcoholic semester. It was also my highest GPA semester. Go figure.

I suppose that’s why Peoria police started cracking down on frat parties at BU pretty hard core as of my Junior year. Lucky for me, I had a fake ID (well, a “real” ID that had someone else’s name on it) by then and was drinking at bars, not parties.

But this was Sophomore year…and Bradley parties were in their prime.

Our little group of friends planned to head over to the SAE party known as Rubber Ducky. Now, SAE at Bradley had a pretty bad rep, but they were loads of fun. I always had a great time when Katie and I would trek over there. Gin and Tonic night is the precise reason why I don’t drink tonic. Ever. Gin and I are still friends, but mix that bitch with tonic and memories of weekday morning hangovers are plentiful. Plus tonic tastes like shit.

So Rubber Ducky. A party in which the frat boys celebrated safety. And ridiculous amusement. A giant bowl of colorfully packaged condoms adorned the front table like a bowl of candy on Halloween. A brother in a duck suit wandered around greeting guests. And a huge baby pool filled with water and goldfish dominated the back yard.

The thing about those goldfish–people swallowed them. Live.

So before we went out, I made Katie, Sheila, and Mark promise promise promise that they would not let me eat a goldfish. They promised. Several lemon drops later, we were on our way to the party.

“You should eat a goldfish!”

“Yes! I should!” I responded immediately. Where was Mark? Where was Katie? Where was Sheila? I didn’t even think. We walked over to the kiddie pool where I squatted down, cupped my hands, reached in, and caught a tiny little fishie. I brought the squirmy fish to my mouth and I downed my first goldfish in one full swoop.

Again, searching for his approval, I looked at him and said, “I did it!”

“I didn’t see it! Do it again!” I was about to reach down into the kiddie pool again, when Mark pulled me up.

“Hey Chrissy, you’ve already done two. He’s full of shit and messing with you. I think you’ve had enough.” Mark reminded me that I didn’t want to do one in the first place. But it was so easy…and I was so drunk.

Then while I was sitting on a bench, Jack, one of the frat brothers that I knew came over, dangling a little goldfish above my face. He held it by its tail fins and I didn’t think. I looked up, opened my mouth, and swallowed the squirmy fish that fell into my throat.

That was the last thing I remember about Rubber Ducky.

All I could say to Cletus and Robbie the entire day was, “Poor little fishies.”

What is the craziest thing you’ve done while under the influence? Have you ever swallowed live fish?