How to Dress for a Trip to Urgent Care…

I’m getting old a helluva lot faster than I thought I would.

Remember the old commercials for the Life Alert? Help! I’ve fallen, and I can’t get up?

Yeah. That was me almost two months ago. Minus the falling part. 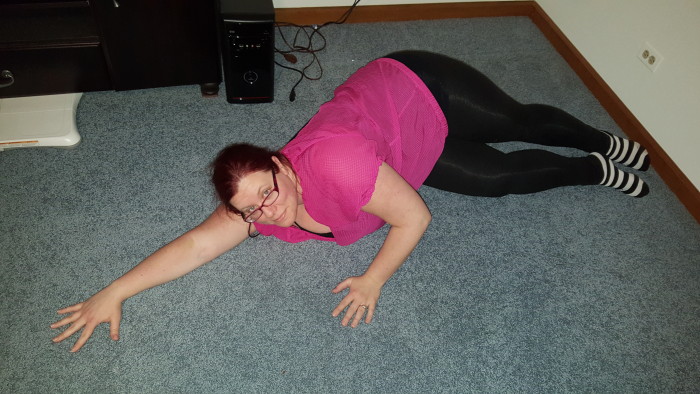 We all know my lumbar spine hasn’t exactly been the envy of all 29-year-old backs. First there was the velociraptor back jonesin’ for some queso. Then the show-offy yoga back that drank too much. And most recently, the panty-dropper back that decided I should have gone commando (and a whole bunch of other back injuries from my youth…).

So when I was nursing my L5 back to health, my doctor tried putting me back on the crazy meds…other than being the only time I’ve cried about the anxiety of wedding planning, they didn’t do shit this time around. So, I got an X-ray and referral for a chiropractor. While I was waiting for the referral to come through (this is maybe the only time an HMO sounds like a bad health insurance plan), I had a hot date to meet up with Andra Watkins, Lea Grover, and Christine Organ while Andra was visiting the Chi. I was initially planning to attend a magical-sounding literary festival in the far west ‘burbs, but woke up feeling a little pain, and even though it was definitely on the mend, I decided to take care of myself. Not to worry, I’d planned to stretch a little and rest a lot, and be ready to meet up with them for cocktails in the evening.

So I reached for a summer frock (I like to wear summer dresses in the winter as my “house clothes” because comfort, ease, and no pants) in the closet, and squealed in pain. Apparently the reaching part was a baaaaad idea. All of a sudden, the going out at all was becoming less and less a possibility. But I thought I’d wait it out a little longer.

While binge-watching Gilmore Girls, I couldn’t seem to find a single comfortable spot on the couch, and I could barely move…so I took to the only place I thought I might find comfort: The floor.

The first relief I’d had all day, I was able to have a lovely nap on the carpeted floor of our front room, while the Gilmores played on. But when I decided it was time to try getting ready for drinks with some writer friends, I realized with no uncertainty that getting off the floor was a near-impossibility. And so I texted Andra and told her to throw back an extra drink for me while I cried a little bit inside (partially because of the pain, and partially because of Andra, who is amazing and doesn’t live here like the other two ladies).

Brian heard me writhing on the floor trying to get up and came running (he doesn’t do this often because he’s so accustomed to my screams of pain). He attempted to help pull me up, but I was afraid I was either too big for him to pick me up or that he would break me. Mostly the second one, honestly. I take back everything I ever said about the previous pains I’ve experienced because this one topped the cake in an entirely different way.

Much like the past pain, I felt as if I had no control over the center of my body. The core is an integral part of functioning, people. If you lose that, you lose the ability to move. In addition to this inability to move, the muscle spasms were throbbing and nearly trying to kill me. It took 25 minutes and a LOT of effort on my end, plus help from Brian, to get myself off the floor.

As soon as I stood as best I could, I looked at Brian and said, “I need to go to urgent care.”

This from the girl who puts off going to the doctor until she really thinks she’s dying, because hypochondria makes her fear the results from the doctor. The decision was swift and immediate. Brian helped me put socks and slippers on, grabbed my purse and handed me my fleece. I was ready to do this thing. Dressed like a Polish war bride…again. I had no bra on, a summer dress, winter slippers, Brian’s man socks, and a fleece-oh and had super greasy hair. Obviously, it was perfectly appropriate for the middle of January.

I got into the car slowly, aiming to produce as little pain as possible (which was near impossible) and found a position that was only mildly debilitating. It took about 15 minutes to get to our destination, and the whole time, I was whining on the phone to my mom. My nearest urgent care clinic is on a busy road, two blocks from the downtown area of the town in which I grew up. With the speed in which I was walking, holding my back as if I were eight months pregnant, at least 40 cars whizzed past us, and I had Brian take a few candid snapshots because I was going to think it was ridiculous one day instead of painful. 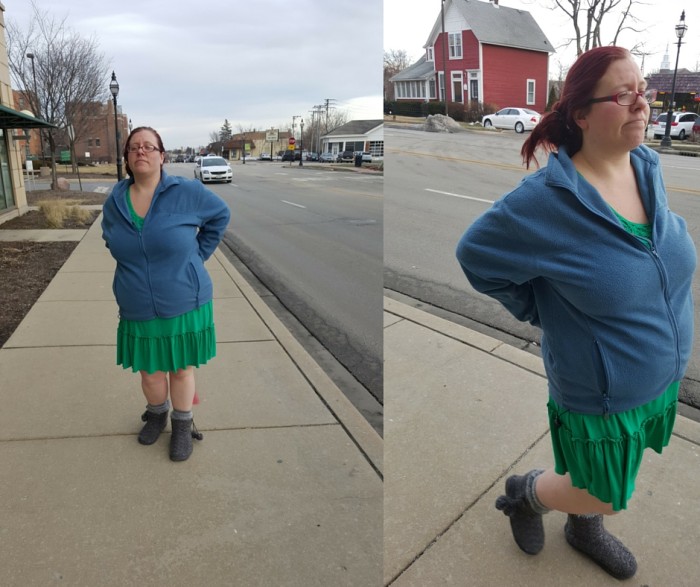 They took me in right away, and Brian had to help me change into the gown they made me wear. I was pouting the entire time. Brian took pictures this time without my asking. 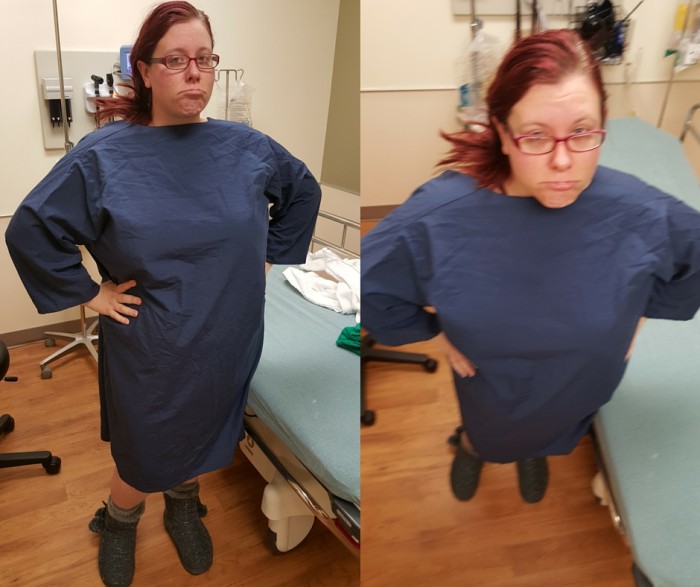 Finally, the doctor came in, gave me a shit load of drugs, injected something into my thigh, and even laughed at my joke about how the last time I let a doctor give me a shot there, I gained 30 pounds and decided I was never taking a hormonal birth control again. (I actually love this part of going to the doctor. It’s like I have a captive audience to practice my own personal stand-up show.) And then she sent me on my merry way. It was just as painful to get back into the car, but at least, there was supposedly some relief coming soon.

A few days later, I was finally feeling better. And physical therapy was just around the corner (by a couple of weeks, because it takes fucking forever to get an appointment). And now, several weeks later, I’m able to laugh at my little visit to urgent care.