The 3 Best Reasons to NEVER Dye Your Hair at Home

As you may or may not have known from my glamour shots, I’ve been dying my hair since I was 12. I started out with highlighting and going blonde(r)…but eventually went dark…then finally the ginger set in.

I’ve gone to professionals, had friends do my dye jobs, and done it myself. I’ve done it all.

Of the three, I obviously prefer the first. But I’d been known to frequently do my own hair (typically when I was broke). Now, I have a relationship with a hair stylist, like a grown up. And I could never cheat on her.

I used to be pretty awesome at it. I mean, dying your own hair blonde is no big deal. The blonde dye doesn’t really stain anything. It cleans up pretty easily… 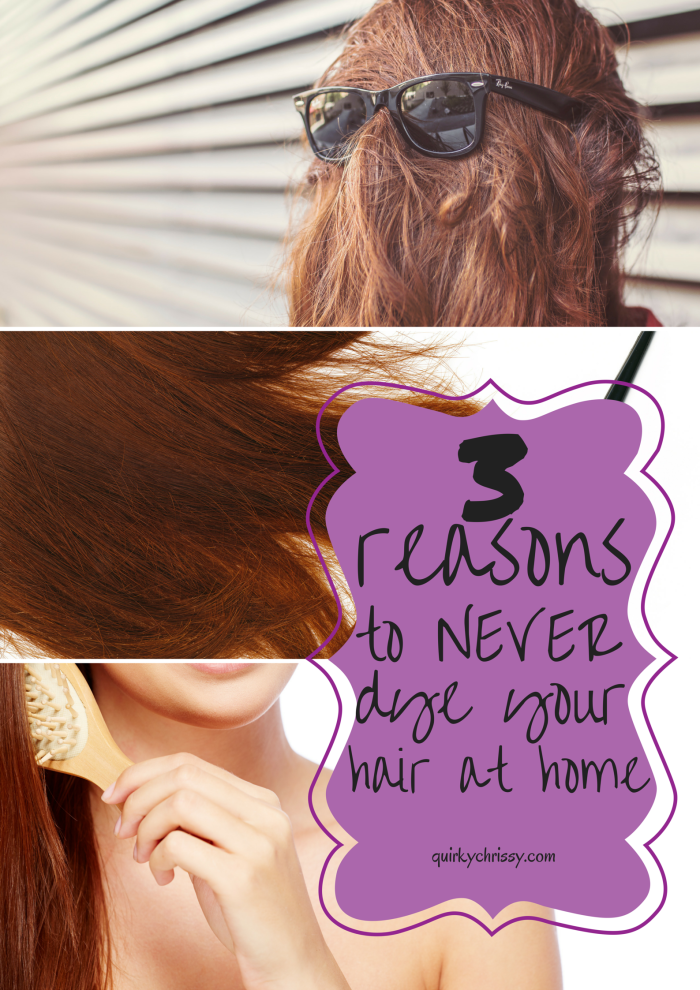 Reason # 1 to Never Dye Your Hair at Home: Stains

So then I finally grew a pair…and decided it was time to go ginger. I had been waiting for so long to do this. Years! Friggin’ years! And finally…I was ready. I went to the store. I bought the color. It was awesome. Bright. Delicious. Ginger. Excitement!

I was living at my pal Mark’s at the time as he was uber busy working in some foreign land, and someone had to make sure Jerry the Mouse didn’t invade again. (Note: This is not like the time I stole his car. I had permission to live in his home.) So I took the opportunity to change my look (in not-my-mother’s bathroom).

Reason # 2 to Never Dye Your Hair at Home: The Stains Hide

So, I may or may not have accidentally made a huge mess in Mark’s apartment bathroom. I cleaned it all up and made sure to get all of the red spots before they dyed anything permanently…or so I thought. A few weeks later, when Mark came home, he called me up and asked “What the fuck did you do?!” He found some red stains. I went over there with my trusty Mr. Clean Magic Eraser and discovered that there were apparently stains that I had missed…quite a few of them…whoops! Those bitches hide.

Reason # 3 to Never Dye Your Hair at Home: Drastic Errors

That same dye job over at Mark’s apartment required a double process. The first was my own, in which I fucked up royally and had blotches of red, blotches of brown, and blotches of in between. It was a disaster. I had to call my sister (a beauty school drop-out) to come over and fix my huge err. Luckily, the second process was done by my sister, and she handled it like magic. And then once I thought it looked hot, I STILL got some pretty nasty commentary about going such a bold shade of red.

Of course, this wasn’t my last adventure in self-hair-dye.

After a few months of dating Brian, it seemed like an OK idea to dye my hair at his house (well, his roommate’s house). You know, since Mom banned me, Mark banned me, and I had already dyed my hair at several hotels–staining their white towels pink (I know, right–it was a terrible idea).

I had a system though. I would run a bath while dying and sit in the bathtub. That way the dye wouldn’t stain the porcelain. Brilliant right? Except that as I set the dye down on the tub edge, I learned (the hard way) that the edge was angled. I first dropped the bottle into the tub of water.

So I placed the bottle on the floor outside the tub. I had removed all towels and anything that could get destroyed in the process. But when the bottle fell onto the bath rug (that I had carelessly forgotten to remove or hadn’t noticed…I don’t even know–sometimes I’m not very observant), it was game over. I freaked out. Red toner spilling everywhere onto this rug.

Brian’s roommate liked nice things. While I wasn’t the biggest fan of this rug, I assumed that it was costly. So I tried to do damage control. I scrubbed it. I loaded it with soap. I did everything I could think of to get rid of the stain. And it looked…better.

I Googled the brand on the tag. No luck. I didn’t know where it came from or where I could replace it. So I contacted Brian…and he told me it was his rug. PHEW and that it was from Walmart DOUBLE PHEW (and I should have known the minute he said it was his, because everything he owned was from Walmart–just like Danell Leyva’s Towels).

I told him we would likely need to toss it. He didn’t believe me and said it could be washed. I explained it was pretty bad and hair dye was permanent. I had just checked on it again, and apparently “cleaning” it made it significantly worse after it dried a little…it was blood red and the stain was enormous. I was still having a panic attack as I typed a G-chat message to Brian, even though he kept telling me it was fine and not to worry. (He still does this a lot because I have a lot of unnecessary panic attacks.)

The following weekend, Brian threw the rug in the washer.

It came out clean.

What errors have you made when dying your own hair? Do you see a stylist or do it yourself? What are your thoughts on stylist loyalty?